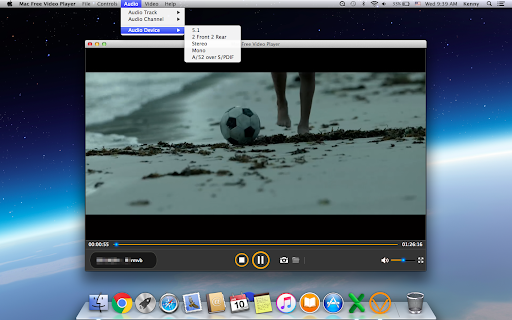 “Just wondering if you can play MP4 video files on OS X without having to install or buy anything. I’ve had such a pain with my windows machine in trying to find codecs to play these files. Gah! Just wondering if the Mac is also easier on this end too. I can’t wait till Leopard because I’m jumping off this windows ship asap.”

As the above users, you may get have the confusion is it possible to play MP4 on Mac OS X or have met the trouble can’t play MP4 in QuickTime on Mac. In this article, we aim to explain the reasons why we can‘t play MP4 in HD or 4K UHD on Mac and offer you the solution to open and view MP4 files on Mac OS X efficiently.

How to Fix MP4 Not Playing on Mac OS X

VLC player supports all the video and audio streams including MP4. You need not to install any codecs or filters to play .mp4 files.

Plex (a.k.a. Plexapp), is an open source media center for Intel-based Apple Macintosh computers, it has a 10-foot user interface design for the living-room TV. It supports a bunch of video formats including MP4.

If MP4 video files are corrupt, Mac may not play such videos in any of the multimedia players. In this case, you’d better download and install a video repair software to fix unreadable MP4 files on Mac OS X.

As we know, MP4 is a container format. A part of MP4 files doesn’t play on Mac may due to codec issues sometimes. To make the most of your MP4 video files, you’d better convert MP4 files to Mac or any other device, editing software, and media player friendly formats. To do it, you can try DumboFab Video Converter for Mac.

It enables you to convert MP4 to MOV for playing on Mac OS X(macOS Big Sur) easily without any quality loss. Besides, it lets you directly convert 4k MP4 videos to iPhone, iPad, Apple TV, iTunes, Final Cut Pro, Imovie or many some other media devices, video editing programs friendly format with the best quality. What’s more, this Mac video converter is built with a video editor, which lets you touch up the video as you like.