Posted in MKV Medium
Author: Chris Gu  Published Date: September 3, 2022  Leave a Comment on Does AE Support MKV? How to Import MKV File to After Effects 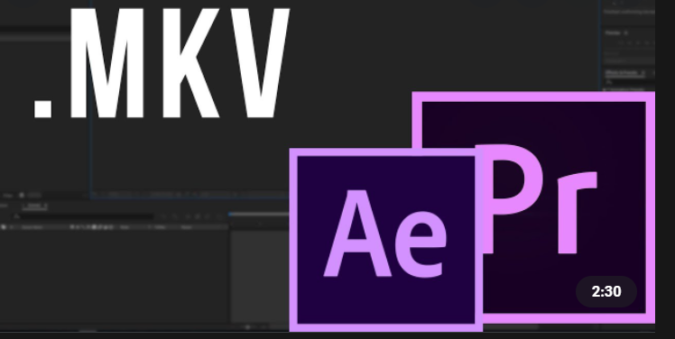 Why doesn’t Adobe add MKV support in After Effects?

The reason varies. You should know that codec format decides whether you can load a video or audio file successfully or not, while MKV is just a multimedia container format which contains various types of data encoded using one of several different codecs. So even though you are importing an .mkv video, the encoded file wrapped in the MKV box might not be supported, which leads to file import failure. Also it could be caused by an old-version After Effects. Different Operating Systems have an impact on it as well.

Best Solution to MKV File Import Failure in After Effects

MKV Import Failure in AE is mainly due to incompatible file format or codec missing, which can be easily solved by transcoding MKV to other After Effects freindly formats. If you have Adobe Media Encoder, you can use it for video conversion. If you don’t have that tool or can’t manage to convert problematic MKV files to desired format with Media Encoder, you might as well try an easier-to-use yet powerful video converter and decoder – DumboFab Video Converter. It works smoothly on both Windows and Mac’s latest system and supports over 1000 video/audio formats. You can not only convert video formats but also edit, compress, transfer videos easily. Multiple video tools can be found here easily.

With it, you can easily convert MKV to After Effects natively supported H.264 MP4, MPEG-2, WMV or high-quality codecs like Apple ProRes or DNxHD. These formats can be well compatible with After Effects. H.264 MP4 can reserve image quality with the smallest file size. Both Apple ProRes and DNxHD can preserve the best image quality and provides better performance when editing After Effects and other NLEs like Avid Media Composer, Adobe Premiere Pro, Final Cut Pro, DaVinci Resolve, etc.

The Steps: Converting MKV files for After Effects

Step 1. Launch the Video Converter, and you can either click “Add” button to import .MKV files, or directly drag and drop the files into this program. WMV, MOV formats are the good choice as well.

Tip: If the default settings do not fit you requirement, you can click “Settings” icon to and enter “Profile Settings” panel to adjust video size, bit rate, frame rate, sample rate and audio channels.

Step 3. Finally, click “Convert” (like an arrow) button to start encoding MKV to MPEG-2(.mpg) for After Effects.

After a while, you will get the converted MPEG-2 files which are ready to be imported to AE for further editing without problems.